Tell Me About Yourself Award! – So blessed.

Well today Carla from Seasons Change, and change very kindly nominated this blog for a ‘‘Tell Me About Yourself’ Award. 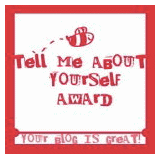 I have to tell you that I am so very blessed that this blog has been nominated, not least of all because of this blog’s relative infancy.

According to the rules of the award I, in accepting the award, have to now…

Thank the person that nominated me first and link the blog to that person before you start.  (Which I have done above)

Then I have to tell the world 7 things  we might find interesting about myself.

Then I have to add my 7 nominees.

So having already complied with the first, here then is my adherence to the second and third parts of those rules…

[Due to the nature of this blog it is perhaps worth my saying that my nomination of the following blogs is not intended in any way to imply that those blogs or bloggers have any link whatsoever with self-harming.  They are simply blogs which I truly enjoy reading and following and are nominated for that reason alone.]

If I Die Before I Sleep

Infinite Sadness or what?

Ok so there you have it.  As I said I am extremely blessed by this award and I am honoured to be able to nominate the above blogs  also.

14 thoughts on “Tell Me About Yourself Award! – So blessed.”

Please feel free to comment, Author reserves the right to refrain from publishing comments that are, in his opinion, considered unhelpful. Cancel reply

I will, where possible, display this sign at the start of any post where I consider the subject matter to be of a sensitive nature and such that could cause possible distress to others.

Please understand that sensitivity is a very personal thing and thus I cannot guarantee that something posted on this site which I do not consider to be sensitive or to potentially cause distress (and thus does not include the displaying of this sign) will not cause distress to some. I therefor apologize in advance if this happens.

Please also be aware that the author of this blog makes no claims to be an expert in this field or a mental-health practitioner of any sort.

Reson8 Freedom is proud to be a member of the Mental Health Writers' Guild. Further information concening the Guild can be found here.

Posts Were made On:

This Blog and it's Blogger is also committed to supporting the sufferers of Self-Harm & their Carers.

Self-Harm (SH), Deliberate Self-Harm, (DSH) and Self-Injuring and those who do it need love, empathy, understanding, and support not judgemental attitudes, ridicule and rejection.

Further information concerning the 'Blog For Mental Health 2013 Project" can be found here.